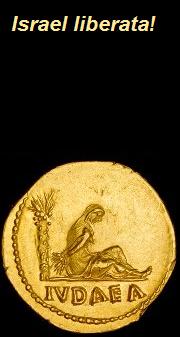 With the suppression of the Jewish rebellion in the land of Israel which resulted in the Second Temple being burned to the grounds, the devastation of large parts of the country, hundreds of thousands of Jews killed, exiled or sold to slavery – the Roman Empire began declaring its total triumph. The Romans minted a long line of coins that were distributed throughout the empire under the name IVDAEA CAPTA or Captive Judaea. These coins in bronze, silver and gold were prepared between 70 to 80 AD, while the rebellion was crushed in 74 AD.

On one side of the coin an armed Roman soldier appeared and on the other side under a palm tree a quiet and submissive female figure. This is the defeated Jewish kingdom, its hands tied to the tree.

Why was it so important to Aspasyanus and his son, Titus, to emphasis the victory over the Jews and to make sure that the entire world knows about it? First of all, to make an example. In those days the Roman coins were a main method for propaganda. Anyone holding the coin could see what happened to those who rebelled against the mighty Roman Empire: they would be defeated and destroyed. The Romans fought against the Jews, first and foremost to maintain their empire from dismantling, and the stubborn (and not so strong) Jews were the example. If they were strong, Rome might have given in. Secondly, the Jews represented the monotheist religions. The thought was that crashing the Jews will also end the Christians, who were considered an extension of the Jews.

The submissive women figure has since then accompanied the fate of the Jewish people for 2000 years, broken and tractable, like a prophesy that maintains itself forever.

But since the establishment of the State of Israel and on Israel’s 66th Independence Day, Israel can look back at those Roman leaders and say that the Jewish nationalism, Zionism, has actually won. There is no more Judaea Capta, with her hands tied behind her back, at the mercy of others, but rather Israel Liberata.

So how did Zionism win?

1. At the beginning of the 20th century the Zionist movement was a trend associated with eccentrics, as what Jew could have wanted to live in Zion, in the desert of death? Today 6.5 million Jews live in Israel (0.3 million of them are still not recognized by the orthodox rabbinical authorities, but they have all undergone what has been termed as ‘sociological conversion’. This current government will probably solve this problem, with the approval of private conversion tribunals), with a huge natural rate of growth for a Western country. It is the country with the largest number of Jews, significantly more than the USA. Zionism has always believed in bringing Jews back to their homeland, and this goal is being fulfilled in front of our eyes. Most families here have three children and more. The number of Jews in Israel will reach 7 million within the next four years.

It is said that if you do not live in Israel and are not orthodox, the chances your grandchildren will be Jewish are close to zero. In other words, Israel is the only place in the world to live in, if you wish your descendants to remain Jewish.

All Roads lead to Rome: Of Ten Lies I told Myself

2. Zionism believes that Israel is the natural home to any Jew who feels prosecuted around the world, and this goal is happening every day. Jews in Europe are beginning an exodus out of the sick continent and Israel is a leading option; It will always be an option. 20,000 Jews immigrate to Israel every year, as Israel has become an attractive base for all Jews worldwide. This Aliyah, as in any immigration, brings new, enthusiastic and dynamic blood to the nation.

Throughout history many Jews ran away from Judaism, from the faith that brought problems, expulsion and death. That is why so many Jews have converted into Christianity and Islam (about 20% of all those living in Iberia have Jewish roots). But today, following the national Jewish emergence, many are trying to find their Jewish roots. These people even have a Facebook page, hidden Jews returning to their source (try “Shavei Israel“).

3. As the Jewish national movement is thriving, Arab nationhood is disintegrating. We now understand that the Arab national movements were artificial, a spin off of imperialism that established nation states in the Middle East without true nations behind them. In these days Syria, Iraq and Lebanon are combined into a new Salafi-Jihadi nation regardless of their old borders. North African countries such as Libya, Tunisia and Mali are also merged into a growing Salafi entity. Tribes are returning to manage the main Arab countries. “Pan-Arabism”? “Nasserism“?  The Ba’ath Party? Arab unity? Are all past cartoons.

Arab leaders like Mahmud Abbas (Abu Mazen) still insist that there is no such thing as “Jewish nationalism”, while the past three years have proved that there is no such thing as “Syrian nationalism”, “Iraqi nationalism” or “Bahraini nationalism”. Tribal and sectarian elements have defeated Arab nationalism, while Jewish nationalism (Zionism) moves forwards to more achievements. The three leading countries in the Middle East aren’t Arab anymore: Iran, Turkey and Israel. In the battle for hegemony, they are all hostile to each other. Would such a reality have crossed the mind of Hertzl, who was submissive to the Turkish-Ottoman Sultan? No visionary dared dream a tenth of what Israel has already achieved.

4. For 2000 years the Jews enriched the countries and leaders that hosted them. Today the Israelis enrich themselves. Israel has reached 38,310$ GDP per capita (The Economist, 2014), similar to that of a Western European country. In the coming four years, with the aid of the newly found gas fields, Israel will pass Germany, the UK and France. Israel is already very close to the UK GDP per capita. According to the Economist, it is already more preferably to be born in Israel than in Paris or London.

The recent Spanish and portuguese initiative to grant their passports to the descendants of those expelled in the 15th century is truly ironic. Those who raped, murdered, looted and expelled Jews, now wish them to return, as Jews bring with them prosperity. Is there a darker attitude than that?  No Israeli wishes to immigrate to those countries, who are falling apart framed in the backdrop of their past; a past that we have not forgotten.

Israel today is a lively economic factor. Once a place to donate money (as philanthropy or charity) and today a place to make money (in business).

5. Israel has become the most vibrant place in the world, second in ingenuity, according to the Wall Street Journal (2013), beating even New York. Development, construction,culture, creativity, culinary, arts, TV, inventions, ideas, High-tec, medicine, agriculture, there is never a dull moment. The Jewish people have returned to be a player, not just a spectator. It is active, not passive, and always alert to its future. It is no wonder that Israel is the world center of the application industry; a true start-up country, where everything flows all the time and changes, so far from the submissiveness described in the Roman coin. The movement is forward in a geometric column of initative.

6. What was described as the national Arab Movement in Israel (“Palestinians”) is also disintegrating quickly, as it does not have a true base. Hamas and the Salafi-Jihadi organizations, which are taking control, eliminate the Palestinian “national” cause, and without the presence of the IDF, the last stronghold of Palestinian nationalism, the West Bank, would also fall. The Palestinian issue was promoted for years by Arab and Islamic regimes to butt-head Israel (Turkish PM Erdogan is still doing so), in order that the international community will not reconcile with the “foreign” Jewish nationalism. But this struggle only exhausted the Arab leaders, who today have their own existential problems to deal with. This has left the remainders of the Palestinian nationalism (that Israel established and initiated), hanging in the air. The Arab Spring was a moment of unmasking in the Middle East and a regional disillusionment vis-a-vis Zionism.

7. Zionism and the establishment of the State of Israel are the glue that sticks together the Jewish communities around the world. Many torrents of contemptuous remarks were said by embitterers on the idea of the “melting pot” that stood in the center of the Israeli nationhood at its beginning. But without this “melting pot” the Jews would remain distant, different and in separated communities. It has become hard to talk abouts sects in the Jewish Israeli life since all communities have now entangled with each other. Ask young Israelis of Russian origin and you will find out that they truly wish to become Israeli. Zionism, the national idea, has created a crystallized nation, but not a monolithic one; On the contrary: there are many traditions, spices and decorations. This turns it into a very fascinating nation. And what further connects these converging communities? The Hebrew Language, the greatest gift of Zionism. Never in history was the number of Hebrew speaking people so large, as it is today, numbering around 10 million.

8. There are over 8.2 million people living in Israel, which is undergoing a huge wave of construction, including enormous transport projects, such as the train to Jerusalem, with its 37 kilometers of tunnels and 6 kilometers of bridges, to be up and running in 2017. Tens of thousands of housing units are being built ,still not enough to fulfill the demand for housing because of the natural growth rate and comming immigration. Highways and interjections, new bridges, a second International airport in the Negev (“Ramon” airport). As Israelis love living in the center of the country, there is a need that cities such as Ariel (now 20,000 residents) and Alfei Menashe (7,500) to grow to 100,000 residence, similar to Modi’in (now 92,000 and in the comming future 250,000). In 14 years time the population of Israel will be 10 million. One must already begin planning new cities in the Negev, in Judea and Samaria and the Golan. Every seven years the Israeli population grows by one million people.

For 2000 years the Jews dreamed about Jerusalem. Who is going to stop them now? They are the most talented, hardworking people in the world. We live the dream of our ancestors.

9. Only in recent years have the Israelis realized that they have been acting as if they are a minority in their country, while the minorities are acting like the majority. This is to be understood because of hundreds of years of being a frightened minority in threatening countries. The 2013 general elections in Israel has brought to power a young generation that fears no longer to exercise its nationalism. No longer Judaea who is frightened by the gentiles, but rather an awakening Judaea demands that it and its sovereignty be recognized within the community of nations. This is not just a symbolic recognition. The one who stands proud is respected; The one who is submissive is despised. It’s a question of self determination, of identity. Do not underestimate the power of this. Self-confidence is not important only to individuals; it is very important to nations as well.

Until a decade ago, Israel was an alternative to the USA and Western Europe. But today Israel is the center; It is the fulcrum. It is no longer the baby that has to be taken care of, but rather an awakening Judaea that has to take care over his elder parents abroad. Once again Israel is the center of the Jewish people, as it was until the destruction of the Second Temple. It is the national, cultural, religious and spiritual center.

Israel has become the Jewish sun and the other Jewish communities are its planets and satellites. Ten years ago the USA was still the sun and Israel was just one of its satellites.

To read this article in Hebrew